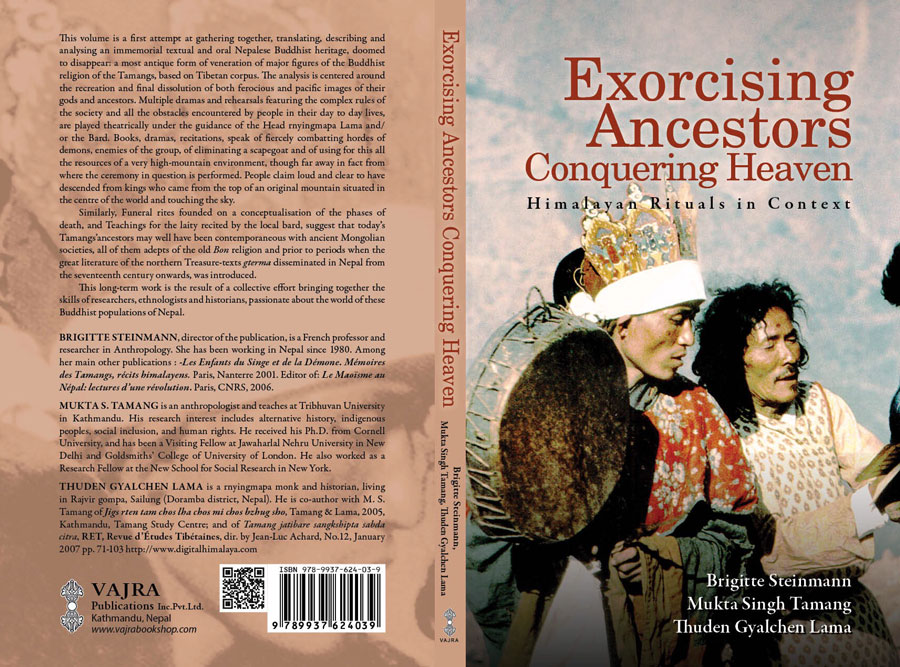 This volume is a first attempt at gathering together, translating, describing and analysing an immemorial textual and oral Nepalese Buddhist heritage, doomed to disappear: a most antique form of veneration of major figures of the Buddhist religion of the Tamangs, based on Tibetan corpus. The analysis is centered around the recreation and final dissolution of both ferocious and pacific images of their gods and ancestors. Multiple dramas and rehearsals featuring the complex rules of the society and all the obstacles encountered by people in their day to day lives, are played theatrically under the guidance of the Head rnyingmapa Lama and/ or the Bard. Books, dramas, recitations, speak of fiercely combatting hordes of demons, enemies of the group, of eliminating a scapegoat and of using for this all the resources of a very high-mountain environment, though far away in fact from where the ceremony in question is performed. People claim loud and clear to have descended from kings who came from the top of an original mountain situated in the centre of the world and touching the sky.

Similarly, Funeral rites founded on a conceptualisation of the phases of death, and Teachings for the laity recited by the local bard, suggest that today’s Tamangs’ ancestors may well have been contemporaneous with ancient Mongolian societies, all of them adepts of the old Bon religion and prior to periods when the great literature of the northern Treasure-texts gterma disseminated in Nepal from the seventeenth century onwards, was introduced.

This long-term work is the result of a collective effort bringing together the skills of researchers, ethnologists and historians, passionate about the world of these Buddhist populations of Nepal.